The Much Too Long Intro

When I collected data from blogs large and small for my drama ratings, the one constant became the consensus of Answer Me 1997.  I didn’t find a single negative review, and of the 30+ dramas I’ve seen it had the highest averaged rating with 9.3 (out of 10).  So it comes as no surprise that a drama that was so universally loved from the international community would be adapted for other audiences, yet I remain conflicted with the prospect.  According to deadline, Fox is very interested in bringing the Answer Me franchise stateside, honing in on the year 1999 and all that NSync/Brittany Spears/Backstreet Boys craziness that occurred.  On one hand, I’ve literally had the exact same thought when watching  AM 97′.   The BB VS N’Sync wars were raging during my elementary school years (of which I was always a N’Sync and JC girl), and so eerily paralleled the H.O.T.-Sechs Kies battles that occurred I even wondered if American music producers saw the Korean b-boy shenanigans and produced such fan wars here (cause I’m nothing if not a conspiracy theorist).

Yet as much as I would love to have that rush of nostalgia bring me back to my old CD collection, bus-ride debates, and pop culture references I would understand in full.  I remain traumatized by the prospect.  Answer Me was a show that nailed its casting, from its stars (Seo in Guk  and Jung Eun-Ji being one my favorite drama couples ever) to the teenage ensemble, to the parents (ditto for Song Dong Il and Lee Il Hwa), in ways I’ve only seen one other show replicate (NBC’s Friday Night Lights).  But really the tone was the most important.  Not that it can’t be done (Freaks and Geeks, FNL, and Skins come to mind, though perhaps more serious), but when the people adapting AM are most well known for creating the 3rd Step-Up movie, its hard to tell if this is gonna become more about  fad-ish pop music instead of its fully-rendered characters.  All this is a precursor and inspiration for this weeks Top 5, because if a global audience can fall in love with a drama steeped in 15 year old Korean pop-culture, then adapting it for American audiences should prove resonant at least for those Americans aged 20-30??  But because I’ve already talked about AM at length , it will not be included in this list.  Mostly I will speak to American television as that’s what I know, but most of these choices seem universal for any TV market.  Also, it seems historical dramas and standard rom-coms wouldn’t really work due to the lack of Joseon eras and over-abundance of multiple season shows.  What’s more interesting (and provides more options) are shows Korean television should adapt, a future top 5 I shall be working on shortly.  But without further delay, here is number 5! 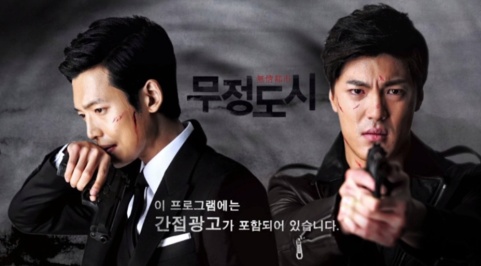 Right now I’m only a few episodes into this Jtbc drug lord drama, but already I see the many similarities between this and several American shows based in the so called “Golden Age” of television.  I’m thinking the writers of Cruel City had seen the likes of Breaking Bad, The Shield, The Sopranos, and/or Sons of Anarchy when creating this drama.  And trust me that’s not a bad thing at all!   The golden age was all about it’s anti-heroes, partly because it begot such dark, complex characters, and Cruel City is no exception.  Though I am loving this Korean take on the anti-hero and its lead Jung Kyung-Ho, the only problem is it might be considered cliche at this point if adapted in the states.  That hasn’t stopped television before, and thus far the story is so compelling that given the right actors I wouldn’t mind seeing an American version.

If this were to be adapted the symmetry would be oddly comforting.  It’s no secret that JXF takes after it’s American counterpart with it ya know being in the title and all.  And it remains possibly the most “American” K-drama I have  ever watched, from its episodic structure, procedural format, and remained strangely reminiscent of 90’s sci-fi I would find my mother watching back in the day (no idea why it screams Stargate, or even Xena, but it does.)  The kicker here is the time period.  Mixing sci-fi with period often means mixed results, so choosing the right era would be crucial.  The easy choice would be Western, but seeing how detectives in the west has been done (does Dr. Quinn Medicine Women count?) and even with sci-fi (the awful sounding Cowboys and Aliens).  I feel this X-Files version should look elsewhere.  For some reason the pre-Civil War piqued my interest.  You still get horses and more primitive weaponry, incorporate historical references with easy access for some sci-fi revision, and you could create the Civil war ghost thing much like JXF did with the suspicious aircraft siting. For other countries adapting,  I would think any time period pre modernized era would work best.  Preferably one where it was a historically rich era, but not one where you know date of specific events.  Helps keep things interesting and could suggest reasoning for why a future time of importance happened.

Not many dramas make me feel the need for another batch of episodes of the same story, which I consider a good thing (its partly why I’ve become such a K-Drama convert).  But City Hunter was tailor made for a mutli-season format.  Partly why this list is so lacking is because these stories must have the possibility to become a series that runs for 40, 60, 120 episodes.  Perhaps the most reliable medium for such long winded stories to take place is the comic-book, meaning Asia’s version of such would be a perfect fit.

In this Marvel movie era, the superhero effect has already begun to trickle down into TV, with Arrow and S.H.I.E.L.D currently airing, Gotham and that Captain America spin-off set to premier in the next year, and Netflix in the process of creating more shows based around the lesser marvel characters.  But with all these previously established in the DC or Marvel universe a character unknown to Western audiences would be a breath of fresh air, yet still provide the heightened comic-book stylings mixed with action sequences that become so well known with this genre.  Also, could this be a chance for Hollywood to finally have an Asian male lead that’s not named Jackie Chan??*  Now if my options were to resurrect Lee Min-Ho’s City Hunter for a second season vs.  anything else, it’s Lee Min-Ho and his all-black outfit every-time, but if I can’t have that, then at least let me hate-watch the American version.  Preferably with alcohol involved.

*MAJOR RANT ALERT: They already screwed that up most recently with Edge of Tomorrow, the Tom Cruise Sci-fi meets Groundhogs’s Day war film based on the Japanese book turned manga All You Need is Kill.  Set in Japan, the main character is a young, inexperienced Japanese soldier, who works with an American war hero (Rita, played in the film by Emily Blunt) to fight creatures and save the world.  I really enjoyed the book, and heard good things about the film but why couldn’t the setting remain in Japan or Asia (I hear the film takes place in Europe, with I’m assuming loads of WWII imagery). Couldn’t the main dude be Asian, while you still have your huge A-lister for the female lead?  I’m not even a Tom Cruise hater, but he’s 50 years old in a part whose age should be half that.  I mean Pacific Rim had zero A-listers, featured an Asian female lead and as the global box office would suggest did pretty well for itself.

2. History of the Salaryman

This is one that seems so Korean I couldn’t dare to imagine an adaptation from another country, especially the US.  But that’s what would make this so fascinating to watch! Salaryman or HotS, was based on the Chinese Chu-Han contention, which the show used  to demonstrate the ongoing power struggle between major corporations.
Its this concept that could be  easily adapted for English audiences, with a historical time period based off the revolution or  maybe Civil war (how the Civil War has shown up twice on this list confounds me).  With all the corporate and business culture America demonstrates, the setting is used in a shockingly few amount of shows, especially when compared to Korean dramas.

Another plus would be its longevity potential, as Salaryman barely scratched the surface of the main conflict before it was quickly wrapped up.  This easily could have used another 10 episodes and much more with proper planning.  My main concern lies on how to handle HotS wild and spastic sense of humor.  Even when serious or dark moments would occur, Hots had comedy baked into the show’s DNA that is hard to replicate, especially with differences between Korean and American humor.  I almost feel that its spot on the list is similar to watching train wrecks, the outcome won’t be to anyone’s liking but you can’t help but watch.

So I almost didn’t include this for the reason that Sun Hwa-Kwon bought the rights for a potential American remake, but seeing as I’m not the only one who thought so, might as well be number 1.  This is a case where this universe is so fascinating with many potential avenues that can be explored.  For instance, the Korean version played off many well worn tropes such as amnesia, love triangles, incest.  Seeing what a different media culture would hone in on could prove interesting.  Other things that could change would be the item that becomes all timey-whimy (as I feel incense sticks would probably not fly, perhaps cowboy boots would be more fitting?), and even the number of times you can go back (they need longevity after-all).  Finally, the acting for a couple of the parts (namely the big bad and to a lesser extent the female lead) could be improved upon so that might be interesting to see.

Honorable Mentions – Flower boy Next Door, My Love From the Star, A New Leaf

FBND: The concept would be easily transferable, but would have a high bar to cross.  Introverts often get the shaft when it comes to being portrayed in the media, so its always nice to see one who isn’t mentally ill or just a geek stereotype.  Unfortunately, the two lead roles would be hard to cast (manic pixie dream guy and the girl who internalizes everything),   so I don’t see this working.

A New Leaf: So this show received an episode cut (from 18 to 16), but I feel this writer would do better with a multi-season procedural format.  The very,very slow build of plot and characters seems a bit too much for a story that’s to finish in 18 episodes, but having the potential for building the world over several years while telling well researched case of the week stories could prove a better option.

MLFTS: Its a great concept, but if played in the states, the show would just seems like an unnecessary update to Mork and Mindy.  What’s Mork and Mindy you ask? Well take a spin-off of Happy Days, add an alien Robin Williams, and finish with a Colorado setting, and you got … well something.

So after writing this all out I must say this is a rather sucky list.  Sorry for those who also thought so but the problem remains that stretching out a single season story into several is partly of why K-Dramas have gotten so much global attention and popularity.  Also, most of the time it would probably prove the wiser option to just watch the original. The list of shows that Korean television should adapt should prove a more interesting exercise.  Perhaps I am truly missing out on some Korean gems that are begging to be adapted (or maybe shows where poor execution could lead to improving on the original recipe).  Comment with your suggestions!